AUGUST 31, 2017 by ANDY BARGERSTOCK (with permission from Iowa Source Magazine) 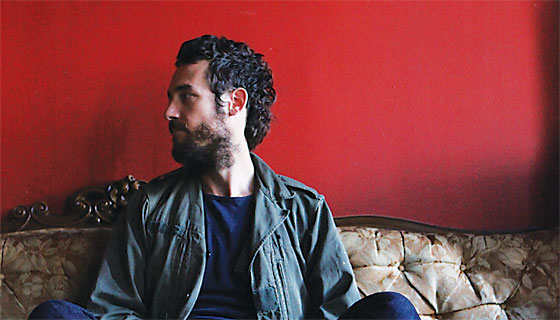 Since 1974, I have been mourning the untimely death of English songwriter Nick Drake at age 26 . . . until I heard the hauntingly beautiful acoustic guitar and singing of Alexi Murdoch. His  resonant mid-tenor voice sublimely echoes Drake’s unique sound. And like Drake, Alexi explores themes of stumbling through desolate times, searching for contentment, and contemplating an uncertain future. Yet few Americans seem to know much about him.

Born in London in 1973, Alexi spent 10 years in Greece with his family before coming back to the UK to settle in Scotland. After attending Duke University in North Carolina in the early ’90s, Alexi moved to Los Angeles, where he caught the attention of DJ Nic Harcourt at famed radio station KCRW. Although Harcourt played his music on-air, Alexi did not show interest in the LA music industry.

So instead of signing with a major record label, he decided to produce his music independently. In 2002 he released the EP Four Songs and followed in 2006 with a formal debut CD, Time Without Consequence. It became one of the most licensed albums of the decade, due to song placements in films, television shows, and commercials.

His second album, Towards the Sun,  released in 2011, benefited from a judicious array of instrumental accompaniment provided by members of the bands Beruit and the National. Alexi’s rhythmic picking was enhanced by piano, horns, and double bass. The acoustic songs were recorded largely on one Vancouver night in 2009 in between shows during a tour.  Later, the collaborators layered in their enrichments.

•       “Breathe.” Close your eyes and pretend that we just discovered an unreleased song from the master, Nick Drake. Let the lyrics float past: “And the answer that you’re seeking / For the question that you found / Drives you further to confusion / As you lose your sense of ground / So don’t forget to breathe / Don’t forget to breathe.” Spellbinding!

•       “Blue Mind.” In tone and nuance of voice, this song reminds me of Irish folk singer Luka Bloom. It opens gently like an Indian raga, then Alexi enters with his acoustic guitar, followed by banjo and dobro. The lyrics encourage us to remember what it was like to see the world through the wonder of “the blue mind of a child.” The song fades back to a drone at the end, as if beckoning the return of the blue mind.

•       “Towards the Sun.” This title track from his 2011 CD feels hopeful, but the lyrics seem to lament a love lost like clouds drifting across the sun.

Enjoy these tracks and revel in the evocative music of Alexi Murdoch. And don’t forget to breathe. Enjoy the shared Spotify playlist below.